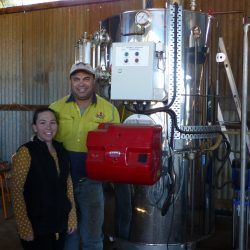 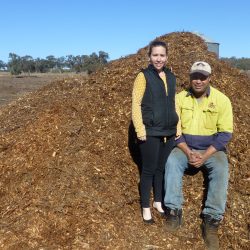 The secret is out, with Dubbo business Native Secrets going from strength to strength in the corporate world.

Along with wife Cherie, their company has evolved from unique circumstances and opportunities which they created.

“Phil runs a labour hire company and an essential oils company were looking for a worker to make eucalyptus oil,” Mrs Thompson explains.

“Phil also manages the biodiversity offsets for the Toongi Pastoral Company and that involves protection of the pink-tailed worm lizard.”

His role as a rehabilitator involved thinning some of the denser areas of woodland to improve the natural ecosystem. This gave Mr Thompson an idea – to use the Cypress Pine in new ways – at the same time creating a new essential oil.

After a lot of research and development, Native Secrets was born.

“It took us a long time to get to where we are, particularly with our Intellectual Property (IP),” Mrs Thompson said.

The procedure involves cutting the trees down, milling the wood and using a distillation process to separate the oil.

There was a lot of trial and error when they began extraction.

“We started in Spring but we found out that the oil goes into the flowering process. It acts as a fat reserve.

“We also had older machinery at the time and received a grant through the Indigenous Entrepreneur Fund which enabled us to purchase a tractor and distillery equipment. It’s now a world-class facility.”

The couple, who are as beautiful and natural as their products, now sell White Cypress, Buddha Wood and Eucalyptus Lemon Scented Gum essential oils as well as a skin and haircare range and scented candles.

They have collaborated with the Olive Oil Skin Care Company to produce the Aboriginal series of soaps using ingredients such as Quandong, Gidyea and Gumby Gumby.

The woodchips are also sold and combined with plastic to create building panels.

Native Secrets distribution is now through six stockists in NSW and Qld and they also supply products to Qantas.

They’ve come a long way in a few short years, and the couple is also supremely proud that their products are reflective of their indigenous heritage. Mr Thompson is of Bidjara/Kara Kara descent with close ties to Barcaldine in Qld while Mrs Thompson has a traditional link to the Wailwan people of Central Western NSW.

They explained that traditionally, white cypress would have been used as a healer by Aboriginal people, who heated the oil in a Coolamon and used it on the skin as an anti-inflammatory.

With research now showing the medicinal benefits of many native plants, the Thompsons described the added benefit of shining a light on Aboriginal culture.

“We now have the science to back up the tradition. And we are creating jobs for our people.”

At the moment, that includes local elder Peter Peckham, who is passing on his knowledge to the young couple. In return, they are helping him with his cultural tour company.

“He believes in telling the story, sharing our culture,” Mr Thompson said.

Before they started the business, Mrs Thompson was an early childhood teacher. Since then, she has invested a lot of time into improving her business skills.

“I did a Women in Business course, the Murra Indigenous Business program. It gave me insight into learning about business and gave us credibility.”

Mrs Thompson was also a finalist in the product innovation category of the 2017 Ausmumpreneur Awards.

In business terms, Native Secrets is moving ahead at a rapid pace. With international markets in their sights, the world is open to this innovative team.

“Our strength is the uniqueness of our products and what we are doing,” Mr Thompson said.

“We weren’t from a business background, but we worked it out as we went. The biggest challenge for us is protecting our IP and getting permission to practice and support traditional knowledge.

“Our aim is definitely to export and share our story with people around the world, and grow our essential oil market to different communities around the country so that the model we have can be put anywhere.”

“We have tapped into something unique and we want to share that.”