To understand the services picture in our smallest towns, the Regional Australia Institute (RAI) reviewed the long term change in the availability of services delivery professionals in these communities across 30 years from 1981 to 2011, measuring the number of doctors, nurses, dentists, police officers,
psychologists, teachers, paramedics and social welfare professionals in small towns in 1981 and again in 2011.

“The emphasis here is that the study was done over three decades,” RDA Orana executive officer Megan Dixon said.

“Between 1981 and 2011, Coonamble’s population decreased by 21 per cent and there was a drop in teacher numbers in both primary and secondary schools.
The 2011 Census recorded no GP or social welfare professional in Coonamble. However, in 2016, there were 50 health professionals and 90 education
professionals.”

Small towns outside major cities continue to punch above their weight in the economy. They are home to primary producing industries including agriculture,
mining and manufacturing,

which together accounted for 22 per cent of the GDP in 2010 and 16 per cent of national employment figures.

“According to the 2016 Census, the largest percentage of employment in Coonamble is in farming. The data also reveals an increase in service industry
jobs such as health, education, financial services and professional services with 38 of 41 per cent in regional areas.”

This does not include rural or remote areas. Very few small towns have health specialists within their communities, including psychologists and dentists,
even though mental health and dental health are nationally significant service priorities. The gaps between small towns and the rest of Australia
are growing for these types of specialist professionals.

“Providing access to basic health services and education facilities is a vital aspect of retaining populations and maintaining these country communities.

“We need to see more incentives to encourage people to live in those communities,” Mrs Dixon said.

“The Federal Government has ruled to support teachers in repayment of their HECS debt, we’d like to see that in all professions.”

The number of professionals in Coonamble is 11.8 per cent, almost half the national average of 22.2 per cent.

In education, 10.3 per cent of residents completed Year 12 compared to 15.7 per cent across Australia.

It is well understood that the severity of health, education and welfare divides in regional communities is greater according to remoteness. The corresponding
challenges that small towns face in accessing service delivery professionals in remote areas is a fundamental contributor to these persistent inequalities
in Australia.

Overall, small town communities continue to have poorer per-capita access rates to service delivery professionals than the national average. Exceptions
to this are for police officers, primary school teachers and paramedics.

“Other challenges include poor telecommunications, skills shortages and the perceptions of living in a small town.” 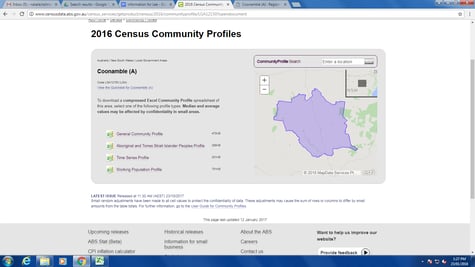