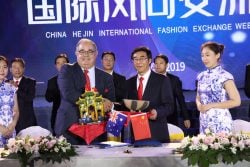 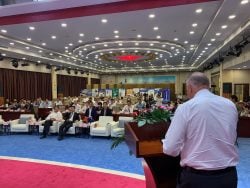 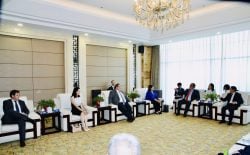 In partnership with Ausfeng, representatives of RDA Orana were very pleased to lead a trade and cultural delegation to Hejin City, in Shanxi Province in deep China from 25 September to 2 October 2019.

Hejin is considered a fourth-tier city, with a population of 450,000 people. Its main industries include coal, steel and aluminium production and agriculture. As an inland city, it is steeped in culture and has an emerging tourism industry largely based on the Yellow River and ancient Chinese culture.

Of key interest is its predicted growth (2 million people by 2025) and hearing of the interest in becoming an environmentally responsible city that is cleaner and includes the development of new industries including technology and education.

Hosted by Hejin, the purpose of the delegation was to “deepen the exchange of humanities through music, dance and other arts; to expand economic and trade exchanges through forums and exhibitions, and to promote the establishment of friendship cities between Hejin and Dubbo and the Orana region, Australia.”

The tour coincided with the China (Hejin) Australian International Fashion Culture Exchange, along with the 70-year celebration of the motherland and incorporated a grand opening ceremony attended by 40,000 people, a cultural exchange, and economic and business exchange and a closing ceremony, attended by 60,000 people.

Leading a delegation of eight senior representatives from a range of companies, RDA Orana Chairman John Walkom was upbeat about the opportunities in Hejin.

“Having completed the delegation, it’s clear there are a lot of opportunities in Hejin. As a developing city keen to improve its environmental footprint, some of the opportunity for exchange includes carbon management, an area where our region has excelled. Tourism development also presents an opportunity,” Mr Walkom said.

“This trade mission provided an ideal platform for eight innovative businesses to build new links and partnerships. Hejin is a fast-growing city which offers opportunities for Australian businesses across a variety of sectors, ranging from agriculture and manufacturing through to tourism.

“Trade missions are an important part of our ongoing commitment to sell the Orana region to the world and highlight that we are very much open for business. We want our friends across the globe to know that the Orana region is the ideal partner to trade with and invest in.”

The trip was used to enter into a series of agreements to boost trade, facilitate knowledge transfers and provide support to firms involved in the exchange. Delegates also attended an opening and closing ceremony, a cultural forum and an economic forum and exchange.

Official business started with a formal welcome from CPP Secretary of Hejin City Mr Ju Zhen, followed by a luncheon.

Thickabilla performed three dances and impressed the crowd with their display of Australian Aboriginal cultural heritage through dance.

Day two of the tour focussed on a cultural exchange and forum which included presentations by Victoria Lambourn and Peter Peckham from Native Secrets who talked about Aboriginal tourism in NSW. The forum was followed by site visits to an aluminium and steel plant located on the outskirts of the city.

Day three focussed on an economic forum with presentations by Megan Dixon, Steven Edmonds, Byron Mathews and John Walkom, as well as Ben Olsen, Herb Smith and James Walters. The delegates were also able to meet and network with business representatives from Hejin and discuss opportunities for business and exchange.

Steven Edmonds of ShineWing Australia summed up the delegation well.

“It was exciting to experience the international opportunities available for the Orana Region while travelling to the city of Hejin. The highlight was working collaboratively with Regional Development Australia and Dubbo business representatives to open doors and build relationships for both regions. As an advisor to many regional Australian businesses, this trip was a great opportunity to support their growth as well as the wider regional Australian economy. While the distance between Dubbo and Hejin may seem vast, the willingness shown by the Hejin private and state-owned businesses will see value created for the Orana Region.”